Why are Sports Commonly Featured in Movies? | Mob Film

Why are Sports Commonly Featured in Movies? 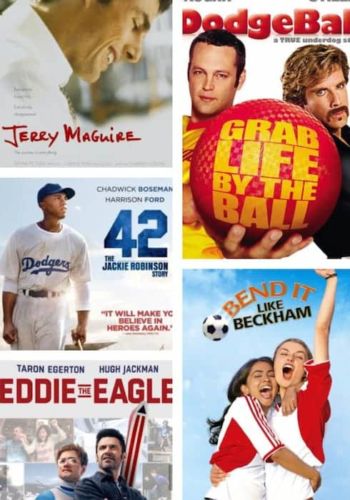 The genre of Sport has always been a pull for screenplay writers, directors and viewers alike, but why? Perhaps it’s the familiarity with playing and watching sports, the relatability of longing to win, or the foundation sports films have to cross multiple genres. If done right, there’s also the potential to win numerous accolades come awards season.

The popularity of sports films has remained a constant throughout the years, dating back to the silent film era of 1914 with The Knockout – a boxing film starring Charlie Chaplin, all the way to this year’s Home Team – a Netflix film starring Adam Sandler.

Sports movies, more than most, have many themes that resonate with audiences, such as family, striving to be the best, and the story of the underdog, where someone is overcoming the odds, all of which audiences can relate to.

Which sport is featured most in movies?

Boxing is the most popular sport to be showcased in the cinematic form on the big screen, with films such as Rocky (1976), based on a Philadelphia boxer who gets a rare chance to fight the world heavyweight. The film was written by its lead star Sylvester Stallone in a role that would define his career.

Likewise, there’s Raging Bull (1980), directed by Martin Scorsese, which follows a real-life boxer Jake LaMotta (played by Robert De Niro), whose temper and violence led his life outside of the ring to be destroyed whilst being at the top in the boxing ring.

But football and martial arts have also made cultural impacts with films such as Bend it like Beckham (2002) and The Karate Kid (1984). For American audiences’, baseball and the NFL have had massive success with films, namely The Blind Side (2009), which saw Sandra Bullock win the Oscar for best actress in a leading role, and A League of Their Own (1992), directed by Penny Marshall and starring Tom Hanks, who she had previously directed in Big (1988).

Why do people love sports movies?

Football/soccer has an estimated 3.5 billion fans, so it makes sense for the billion-dollar film industry to tap into that fanbase. When people see a film based on their favourite sport, the chances are they will watch it.

Many people take pride in knowing the game’s history, but most love the passion of the rivalry between the teams and players.

This makes the movies exciting, with a clear divide that is easily understandable as to who the audience should be rooting for throughout the film. The underdog story is always popular, and it’s an inspiring feel-good theme that resonates with people. Especially during the darker days, these films can bring hope and familiarity to situations in which audiences may find themselves.

Viewers enjoy these sports movies because sport comes with definable rules and a clear way of declaring winners and losers, which life very rarely has for most.

A common issue about sports is that they appear inaccessible without vast knowledge and background. In contrast, a film gives the viewer an almost condensed history lesson as to the inner workings, as seen in the movie Moneyball (2011), starring Brad Pitt and directed by Bennett Miller. Miller then went on the direct Foxcatcher (2014), another sports movie based on Olympic wrestlers, starring Steve Carell (The Office), Channing Tatum, and Mark Ruffalo.

What sports movie is most successful?

The Karate Kid (2010) takes the top spot for the highest-grossing sports film, with a box office of $359 million, a retelling of the classic 1984 film of the same title.

However, many other sports films remain in popular culture and have had a much larger impact on people. This includes Rocky or comedy sports films such as Dodgeball (2004) starring Ben Stiller and Vince Vaughn, written and directed by Rawson Marshall Thurber. Adam Sandler has also experienced success with Happy Gilmore (1996), The Waterboy (1998), The Longest Yard (2005) and Hustle (2022), all of which are available on various streaming platforms at no extra cost. So arguably, the success of a film should be based on its longevity and how people continue to re-watch these films.

Clearly, sports movies have found a place in popular culture, and even though none have been billion-dollar blockbusters, they are award winners/nominees and have huge watchability. This factor makes them successful for the streaming platforms they now live on. Get in touch with us for more information on sports movies or to start a sports production of your own.