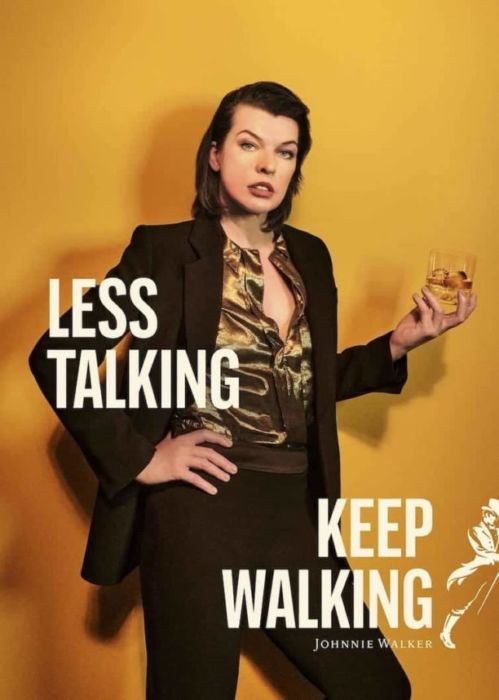 Milla and Johnnie Walker seek to encourage viewers with a core motto: “Less Talking, Keep Walking”, reflecting Johnnie Walker’s action-orientated mindset, the progressive nature of Eastern Europe, and Milla’s unquestionable success and consistency in everything she does.

Filmed in studios in the heart of Manchester, the collaboration with Dept Agency in Amsterdam saw the star couple (husband & wife) partner together for the first time on a commercial production. The Mob brought a bit of Hollywood magic from LA for ten days of studio pre-production, complex set builds, lighting, rehearsals and planning for the 2-day shoot.

Shot on the scale of a feature film with renowned DOP Stuart Graham and crew of over 200, all collaborating to create a stunning and seamless brand film. It’s a classic example of what we do as a stand-out production company bringing such a massive commercial project that would otherwise have been shot in LA or London.

The campaign went live in fourteen countries across Eastern Europe on TV, digital, social and out-of-home, and hopes to inspire individuals to socialise and interact with confidence.

A Campaign with Johnnie Walker and Milla Jovovich

The world over, we all look to the glittering hills of Hollywood as the home of the movies, but in the UK, we easily have the 2nd biggest film industry in the world. Manchester is now well established as the 2nd biggest production centre outside of London, so it’s a thrill for us to not only bring such a massive project to our city but also to the crews and incredibly talented choreographers, glamour teams and art department who may not otherwise get to work on such a project.

Anderson loves shooting in Manchester and always seizes the opportunity to see his family and head back to his native Newcastle, so it was especially lovely to bring Milla over to spend some time in the city as well.

To win awards such as Best International Campaign is, of course, the icing on the cake and a great acknowledgement to everyone who worked on the campaign.

If you’re looking for a similar campaign that stands out and has the potential to win awards, get in touch with Mob Film.