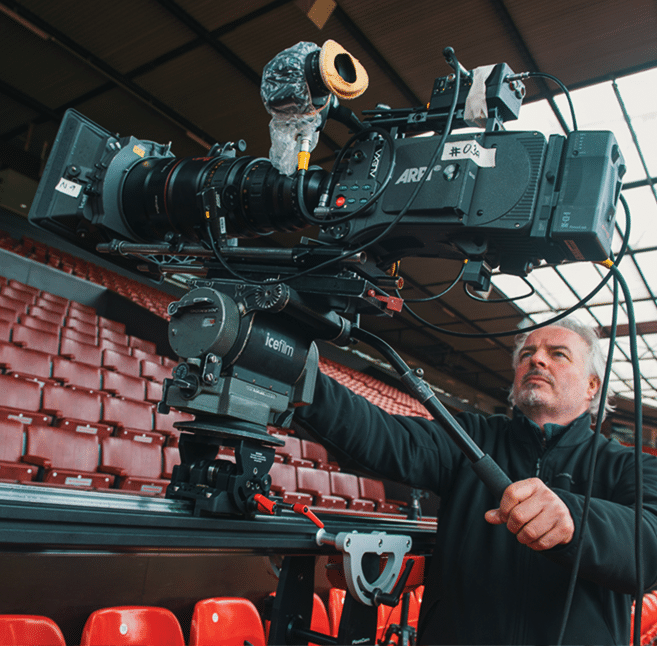 Mob Sport are one of the most experienced sport production companies on the planet; based in Manchester, we are providers of world-class creativity and the highest production values.

For 25 years, we’ve been producing award-winning content for global sports brands, rights holders and consumers, including the likes of Manchester City, Manchester United, Liverpool FC and Everton Football Club, through to golf, cycling and Formula E.

As industry leaders of sport productions in Manchester, we decided many years ago that we wouldn’t mass produce cheap subpar content and instead stick to one key principle – to exceed client expectations – in value, service and production!

And nobody can deliver that to the standards that we do because whether your budget is £10k or £2 million, it’s in our DNA to produce sports commercials and content of the highest production value.

Why Film Sport Productions in Manchester?

Mob Sport is based in the very heart of Manchester City Centre. Since hosting the Commonwealth Games in 2002, Manchester’s sports industry has grown and is now home to some of the world’s leading football, athletics, cricket, netball, rugby, squash, swimming, and water polo clubs.

With such growth has come a huge demand and appetite for sports content from brands and viewers alike. As such, the industry and infrastructure within Manchester have grown rapidly to accommodate the relentless output. It is now the 2nd leading city and region for film & TV production in the UK.

Manchester has a reputation for warm welcomes, an internationally renowned music scene, two Premier League football clubs, home to national broadcasters at Media City, locations for some of the biggest productions in the world, and some of the industry’s best and most experienced directors/crews, producing award-winning content for all the leading sports brands.

Engaging the audience is vital to converting them into customers, right? What story do you want to tell? What platform is right? How will you deliver your message? We can work with you to develop the answers because whatever your brief, we can execute it!

Through our vast world-class network around sport productions in Manchester, we can source the right director – from any corner of the globe – to work in partnership and collaboration with you to produce content that connects audiences with brands and sponsors.

We also understand the pressures put on Elite Athletes and ensure we get the best of them on any project. We display the empathy needed to understand the challenges of rights holders and athletes concerning content creation. We’ve worked with world-class athletes across various sports, including the likes of Cristiano Ronaldo, Mo Salah, David Beckham, Sir AP McCoy and Dame Jessica Ennis-Hill.

Did we mention how much we pride ourselves on delivering a sport production of the highest quality? Well, we took this one step further by investing in our own full-spec post-production facility in Manchester City Centre: Rabble Post Production.

Our cutting-edge facility offers services covering ADR, voice-over, audio, colour grading, VFX and motion graphics, ensuring we can guarantee the highest levels of finishing across all your productions.

Best of all? We’re incredibly friendly and fun to work with, and we take absolute pride in making your experience as effortless and enjoyable as possible.

So, next time you’re looking for sport productions in Manchester, you know who to get in touch with. We look forward to hearing from you.